Home > Who We Are > Attorneys > William C. Herbert III 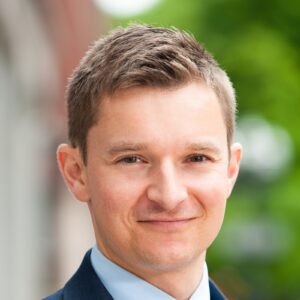 Will began his career as a prosecuting attorney in Columbus, Ohio, directing criminal investigations and representing municipalities. Will transitioned to private practice in 2013 when he moved to Maine and began focusing on civil litigation, including personal injury, criminal defense, family, and general real estate litigation. In 2015, Will joined the personal injury practice of Hardy Wolf & Downing and now devotes his entire practice to trial work in the context of personal injuries, wrongful deaths, nursing home malpractice, industrial accidents, and sexual assaults. Will is also licensed to practice in New Hampshire.

Since 2013, Will and his wife Jenna have lived in Androscoggin County, with their two boys Charlie and Jonah. Will is a bass player, drummer, and fitness enthusiast who enjoys litigating and trying cases about as much as all his other hobbies combined.